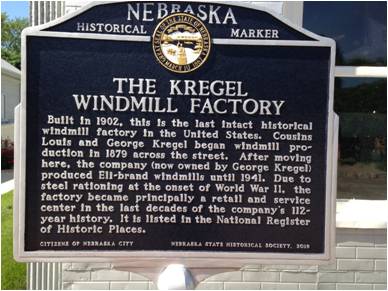 A two-day training program for teachers, held in partnership with the Kregel Windmill Factory Museum, Nebraska City, Nebraska.  The old windmill factory (actually a wind-pump factory!) was a centerpiece of the program.  The event was sponsored by the Richard P Kimmel & Laurine Kimmel Charitable Foundation, Water for Food and the Nebraska Farm Bureau. 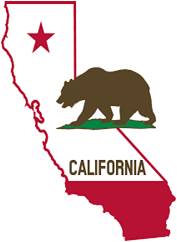 In partnership with the California Geothermal Heat Pump Association
Participants at the American Ground Water Trust Geothermal workshop heard the geothermal industry’s top experts provide a great learning experience about the design and installation of geothermal heat pumps and ground-source heat exchange systems for both new and retrofit applications. The program included explanations of financial incentives, operation economics  state-of-the-art computer design systems, best practices for installation and the benefits of hybrid systems to achieve “net-zero” for residential and commercial buildings.

The first AGWA/AGWT joint conference was held in Ontario, CA in 2000. Since then, this annual program has provided an important information  exchange and networking opportunity for California’s water agencies,  utilities and water districts, and for all water professionals (scientific, engineering, managerial, legal, environmental, regulatory), end-users of water, and local and state elected officials involved with water policy issues. The focus of every program has been on current groundwater management issues in California.

NEWS - December 2015 – To Drill or Not to Drill? To Pump or Not to Pump? Tulare, California 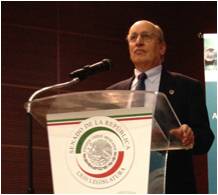 The AGWT Executive Director was an invited speaker at the Mexico Groundwater Colloquium held in Mexico City. The main focus of the event was on sustainability and the importance of having scientific understanding of regional groundwater flow concepts as a basis for groundwater management. The meeting venue, inside the Mexican Senate building, provided a great opportunity to increase legislator awareness of the vulnerability of Mexico’s aquifers to over-pumping.  The program was organized by the Instituto de Geografia, UNAM (National Autonomous University of Mexico) and several Mexican Water Agencies.  The event was attended by approximately 100 politicians, political advisors, municipal officials, water and groundwater agencies and academics.
Andrew Stone’s presentation was, “Proper planning for water supply sustainability: All available scientific data should be used.” He participated in the event representing the AGWT and as the Director of the Commission on Groundwater Outreach, of the International Association of Hydrogeologists.
Also included in the international panel of experts invited to participate in the colloquium was Xiao-Wei Jiang, School of Water Resources and Environment, University of Geosciences, Beijing, China;  Judit Mádl-Szőnyi, Department of Physical and Applied Geology, Eötvös Loránd University, Budapest, Hungary;  and Udo Weyer, WDA Consultants Inc., Calgary, Alberta, Canada.

The AGWT’s two-day Florida Annual Groundwater Conference was the meeting place for 150 engineering scientific and management professionals, end-users and citizens with an interest in the management of Florida’s aquifers The program provided updates on projects and technology innovations and the regulatory framework that allows for the development and the conservation of the state’s groundwater.