Geologists: Shale gas likely under Connecticut River Valley, but would be hard to exploit 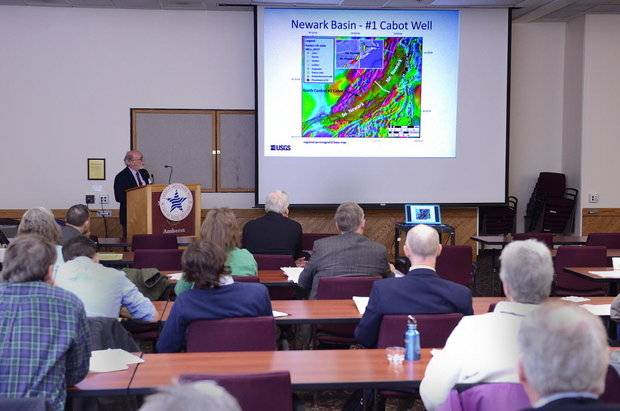 AMHERST — Fracking, the controversial method of extracting shale gas or other petroleum from deep below the earth's surface, might be possible in the Connecticut River Valley, geologists say.

But the rock deposits likely to bear gas are thin here and difficult to access, making commercial exploitation of the resource unlikely in the near future.

“It's not hard to hit,” said James L. Coleman Jr., a research geologist with the U.S. Geological Survey. “It's hard to do anything with once you get it.”

Coleman was one of the speakers Thursday at a day-long conference on the future of shale gas, hydraulic fracturing and the state's future organized by the American Ground Water Trust and hosted at the University of Massachusetts Amherst campus center.

Coleman and his colleagues at the U.S. Geologic Survey released a study in June looking at the gas-producing potential of rift valleys up and down the East Coast, including the Hartford/Deerfield Basin here in the Pioneer Valley.

There are rock layers capable of containing shale gas, he said. But they are only 2 to 12 feet thick in most places, compared to thousands of feet thick in the Marcellus Shale region to the west in New York, Pennsylvania, West Virginia and Ohio.

Those deposits were laid down by a vast prehistoric ocean, said Richard D.Little, a professor emeritus of geology at Greenfield Community College and a speaker at the conference. By contrast, the shale-bearing rock here was laid down by a series of lakes.

Those layers are also lower in organic content, making them less likely to contain a lot of gas, or oil for that matter. Little said the layers that might have petroleum here have also been tilted by subsequent geologic forces. That would have allowed the gas to escape over time.

Coleman can only say the conditions are right for gas in the layers. The only way to know for sure if there is gas is to start drilling test wells and find out, Coleman said. No one has done that in the Pioneer Valley. And, with a glut of natural gas on the market, low prices and other areas of the country showing more promise, no one is likely to start drilling here soon.

“If I gave you money to go find gas, this isn't where you would look,” Coleman said. “But I've seen companies do some crazy things. It could happen.”

That is the reason to have the conference in the first place, said Garret W. Graaskamp, a hydrologist with the American Ground Water Trust.

“This is something for Massachusetts to think about now, without the pressure of having a proposal on the table,” Graaskamp said. “Someone could come knock on a homeowner's door tomorrow.”

Afternoon sessions at the conference focused on the lack of regulations and zoning restrictions addressing gas drilling in Massachusetts.

Coleman said this area would be a hard place to drill. It's too built up and developed.

“You are rural here, but not Wyoming rural,” he said.

Still, Richard Seelig, of Pelham, is worried enough about hydraulic fracturing and its potential to pollute groundwater and make wells unusable that he attended the conference. He fears companies will open up international export markets where gas demand and prices are higher. That might make whatever gas might be under the Pioneer Valley more attractive.

The conference drew 55 people, including a number of geologists.

“I know that once you pollute groundwater, that resource is gone forever as far as humanity is concerned,” Seelig said.

A loosely organized group of UMass students opposed to fracking had a self-described "counter-conference" Thursday afternoon.

"Why even have the conference if there is no interest in fracking here," said Samuel King, a junior from Orange majoring in sustainable community development. "We think this is just the first step. We know what fracking has done in other places and we don't want it."

The board of the American Ground Water Trust includes people from the energy industry.